Leading (and managing) the charge to electric fleets 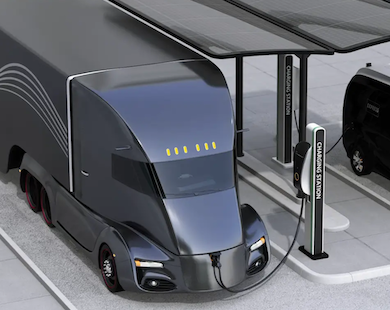 The transition to electric vehicles is at a tipping point. The economics are almost there, but only in the right situation.

Picture this: You heard the buzz about cutting costs and emissions with electric fleets. So, you added some electric vehicles to your fleet in part because you were anticipating you’d save money "fueling" them. Then, you got your utility bill — and discovered that your battery electric vehicles were costing you 60 percent more to fuel than your gasoline- or diesel-powered ones.

That’s exactly what happened to one regional transportation authority when it switched to electric buses in a shuttle application. The electric shuttles were costing 73 cents per mile, while the fuel for the non-electric transit coaches was 46 cents per mile.The transition to electric vehicles is at a tipping point. The economics are almost there, but only in the right situation.

To make back your investment in EVs — and then some — you’ll need to make sure you’re managing charging to keep electricity costs down.A typical commercial electric bill has two cost categories: first, the cost of total power used, and the second, called "Peak Demand Charges" that are based on the highest load incurred over the billing cycle. Charging electric buses and trucks can cause unexpected peak loads on the utility’s capacity, which can result in your energy bills doubling in size.Unfortunately, too often, we see cases where fleet managers do not plan this far ahead and run into trouble with unmanaged charging.

Put simply, unmanaged charging occurs when vehicles in a fleet are charged as soon as each one returns to base. There is no control of charging rate, time of day or energy optimization. This often results in significantly higher energy costs from peak demand and charging at times when electricity is more expensive.

Consider the average battery capacity for a heavy-duty vehicle can range from 400 kWh to 600 kWh, which needs to be filled in about six to eight hours. That amount is roughly equivalent to the energy used by a single-family home over a month. Thus, when a fleet with electric vehicles start charging at the same time, it places a huge demand on the grid. This is why one of the biggest concerns of adding EVs is the cost to charge them. The major reason? Peak demand charges are based on the largest amount of energy consumed, measured in 15- or 30-minute intervals throughout the course of a billing period; it is not the same as your total energy consumption cost. Peak demand charges can be thought of as overhead fees for higher energy usage at any point in time. (This is because the utility company incurs costs to have the equipment and power available to meet that energy demand at all times and has to plan for the highest loads.)

As a result, peak demand charges billed per kW can sometimes exceed the monthly cost of electricity consumed.Unmanaged charging requires oversized supporting infrastructure at your facility (charging stations, transformers, switchgear, etc.) to handle the higher peak load. Fleet owners may need to install additional chargers or switch facility equipment such as electric panels and transformers to handle increased electric capacity. These infrastructure upgrades can be expensive and may take 18-24 months to install, which can affect your fleet transition timing.On the other hand, managed charging can be equated with smart charging.

It takes into account energy costs, dispatch schedules, vehicle battery size, environmental conditions and other factors when dispensing energy to electric vehicles. Managed charging is designed to help you minimize peak demand charges and essentially, "smooth out" your energy consumption. This also can help fleets save on overhead and equipment costs by getting the most optimal use of the existing electrical infrastructure. With managed charging, you may be able to charge more vehicles without the expensive equipment or charger upgrades.Start asking questions early to find out your options as you begin to procure electric vehicles or grow your EV fleet. It’s also useful to engage with your utility company early in the process and to use a fleet electrification planning tool to explore some "what if" scenarios and questions you have surrounding charging.Failure to manage the charging of your electric vehicles across the fleet can result in high peak demand charges and additional expenses. One way to keep utility costs low when adding electric vehicles to your fleet is to invest in a managed charging solution that helps cycle vehicles through charging while reducing peak demand charges. This will ensure that your vehicles are charged and ready at the lowest possible cost.

Leading (and managing) the charge to electric fleets