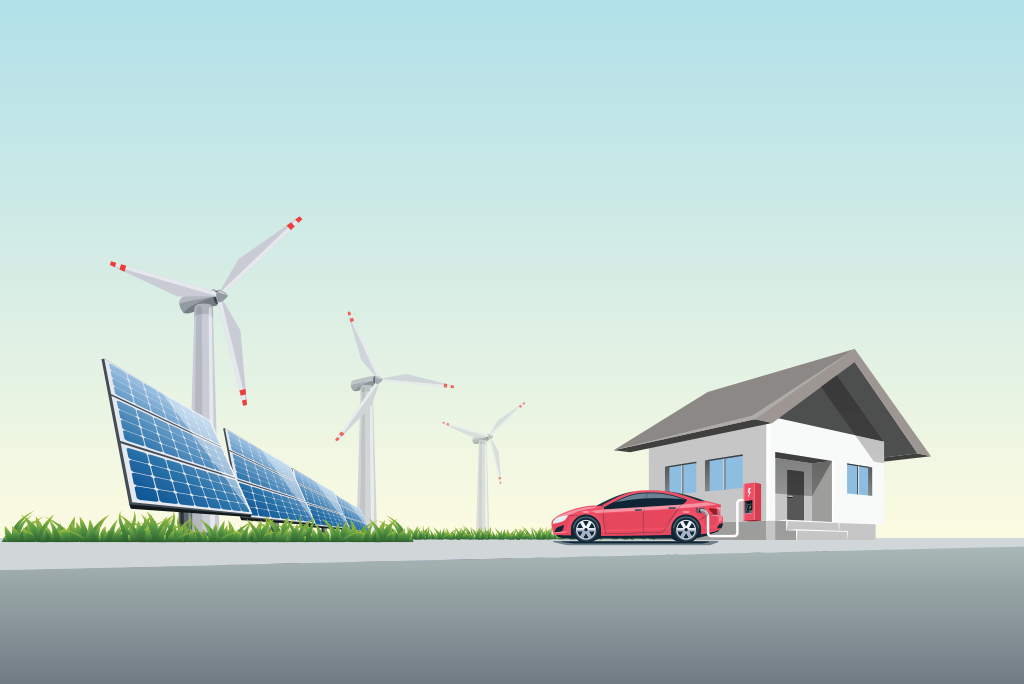 A look into the current status of V2G in the U.S. and recommendations for EV fleet owners to minimize their utility bills.

V2G or vehicle-to-grid is the concept of using an electric vehicle’s battery as a source of power that can be sent back to the grid. This is enabled by bi-directional (two way) flow. Similar technologies such as V2H (vehicle to home) or V2B (vehicle to building) are already in use by the public. Those technologies help people adjust building or house loads to minimize electricity costs. Also, in the case of blackouts, EVs can be used to maintain emergency appliances or even charge smartphones.

A number of vehicle-to-grid projects have been implemented to showcase the technology’s potential. This is especially true in how it can contribute to the stability or resiliency of electrical grids. Examples include Parker Projects in Denmark, or M-tech Labo operated by Mitsubishi Motors in Japan.

These projects have demonstrated that V2G is technically feasible. However, there are still challenges to mass commercial implementation of V2G. Foremost would be identifying viable business models for operators, such as in EV fleet applications.

The short answer is not yet. Even though many recognize the benefits of V2G, EV owners cannot just "turn on" V2G capabilities in their vehicles and expect commercial transactions to start working. There are several reasons why.

The commercial adoption of V2G needs to be supported by policy that regulates electricity markets. Electricity has a unique quality where supply (amount generated) and demand (amount used) have to be in constant equilibrium.

Electric companies, known as Independent System Operators (ISO), are constantly adjusting this supply and demand by sending signals to generators such as thermal or hydro power plants to change the amount of power produced. This process ensures that people can live their daily lives without experiencing sudden blackouts.

V2G can significantly impact the electricity supply, so it will take time to enact regulation changes to accommodate the new technology. ISOs would want to ensure that the electricity from EVs can be precisely calibrated before signing off on commercial implementation.

Some voices in the field have also warned that V2G does not pencil out economically. Colin McKerracher of Bloomberg New Energy Finance notes  “Private customers are still hesitant, and many of the revenue numbers you see rely on tapping mostly into frequency regulation markets, which are high-value but can quickly become oversupplied.” The frequency regulation market is an example of a transactional market that EV owners can enter once they are V2G operators.

Most analysis use the existing price level from the frequency regulation market to model potential V2G revenue and profits. McKerracher points out that the market price of V2G service will be driven down as more and more V2G operators enter the marketplace. This brings profitability into question, and whether there is a lasting business case to be made.

Another consideration is the impact of bi-directional flow on vehicle battery life., There is a risk that discharging power from EVs degrades the battery and could actually increase total cost of ownership for the vehicle owner. Particularly if the battery and replacement costs remain high, it’s uncertain that V2G is actually economically beneficial to EV car owners.

Can V2G negate the costs of charging vehicles?

Again, the simplistic answer to this question is no. Many fleet owners are attracted to the potential revenue stream from V2G. Since the market is not yet established in the U.S., it's challenging to properly forecast the revenue of these operations. What we can do is observe pilot cases in other countries.

One example is a V2G project in Denmark that showcased a fleet operator earning over $1,500 a year running V2G operations with 10 Nissan e-NV200 vans. This case demonstrates the earning capability of V2G, although the same revenue potential in a U.S. market will likely differ. But take this into consideration: even in the case that V2G operators can earn $1500 per vehicle, that income can be offset by additional costs caused by poor charging management.

When it comes to the costs of operating electric vehicles, poor or non-existent charging management can have outsized impact on the size of energy bills. Internal analysis shows that the EV fleet owners can save 40-70% of energy costs by using managed charging, which means charging EVs when the rates are cheaper.

In fact, one regional transit agency found that they were paying “nearly 60% more to operate (its electric buses) than diesel coaches”. According to the same article, 80% of the costs on the bill (269,000 USD) could've been lowered had there been proper charging management implemented.

This means that V2G is not enough to offset EV charging costs. Particularly for fleet owners, minimizing operational costs requires a combination of pre-planning with utility involvement, charging and energy management, along with technology like V2G.

So what can we do?

V2G has great potential to become a revenue source for vehicle owners by providing a channel to sell electricity from EVs back to the grid. However, there are many questions that proponents should address to validate its profitability.

For operators who are looking for an easy hands off approach, software services like the Electriphi Command Center can automatically control charging so that EV fleet owners can charge their cars with minimum costs while ensuring full serviceability.