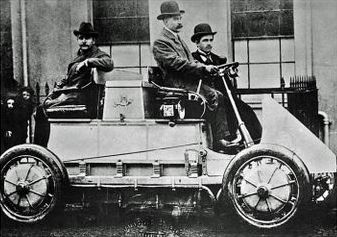 Electric vehicles are not a new option: they had a short bout of success dating back to the 1800s before gasoline engines became the mainstream. There are lessons that can be learned from this history.

While many of us would say electric vehicles (EVs) are a relatively new development, they actually first came on the scene in the early 1830’s. Interestingly, the internal combustion engine did not appear until 50 years after.

The original commercialization of EVs occurred in 1897. Back then, EVs had many advantages over their internal combustion engine (ICE) counterparts — many of which still hold true today: EVs produced no vibration, smell or noise and no gear changing was needed. By the turn of the 20th century, more than a third of the cars in the U.S. on the road were electric. This was possible after one of the major challenges of electric vehicles — the ability to charge them — was solved when many homes were wired for electricity.

What then caused electric vehicles to virtually disappear? As roads improved and cities were connected across the country, drivers demanded more range than could be provided by an EV. Importantly, the electric vehicle lacked the network of charging stations that could purpose it for long-range driving. This gave an opportunity for ICE counterparts to fill that gap as gasoline companies built out fueling stations across the country, along with an extensive maintenance and repair network.

Driving ICE vehicles also became more cost effective, spurred by the discovery of oil in Texas which further reduced the price of gasoline. Mass production lines made the vehicles widely affordable, and the invention of the electric starter removed many operating hurdles in the ICE. These factors together helped propel gas and diesel mobility to its dominant role for most of the 20th century.

Now fast forward to more recent times when focus on environmental issues and the impact of the oil and gas industry have re-introduced the appeal of electric vehicles. In the past two decades, a host of start-ups and corporations have invested in the development of EVs.

Even now, challenges are still abundant, many of which would be familiar to our historical counterparts: curtailing driver concerns about vehicle range, reducing battery cost and weight, and the need for more charging infrastructure. Early manufacturers reported high supply chain costs and difficulties in scaling that made it hard to produce EVs at a competitive price.

The good news for EV followers is that the economics are tipping in favor of electric. Recent innovations in batteries, energy storage, and increased charging infrastructure penetration have led to increased viability of electric mobility. Along with a renewed focus on environmental responsibility and the development of near-zero and zero-emissions zones, these shifts will expedite the adoption of electric vehicles across consumer and commercial applications.

The lesson learned from history is that EVs extend way beyond just the vehicles themselves. Success of electric vehicles this time around will take a combined effort of vehicle manufacturers, battery suppliers, fleets, utilities, financiers, government and private organizations. This is no truer than in the commercial fleet space today.

Any fleet considering electric options should engage early with its local utility company to evaluate existing infrastructure and understand its charging needs. Online resources like electrification planning calculators can help provide high level analysis of energy costs, infrastructure and environmental impact for individual fleets. These tools are available for anyone interested in learning more about EV total cost of ownership.

Fleets also need to be realistic about which applications are best suited for electric vehicles in the near term. Regional haul applications — 300 miles per day or less — could make the most sense to electrify first. Also in this bucket are vehicles operating in an out-and-back model where they return to base at night and can be charged at the fleet location, employing smart charging software and services to manage energy and operations.

The success of electric vehicles will depend on vehicles that perform well, have a reasonable cost of operation, and having the infrastructure and charging network in place where the vehicles will be running. The good news is science and technology have advanced tremendously since the advent of the first electric vehicle. We are already seeing and will continue to see EVs as a viable option for many fleets in the foreseeable future.